We learn something about Julian in this section. It might not be a deep look into his character, but it is educational nonetheless. Auggie uses a great simile, saying Julian "looked and acted like someone in a KidzBop commercial." (And with all the choices of videos to choose, I chose this one. Who knew Mr. W was a Lady Gaga fan? You learn something everyday.)

Auggie notices Maya and Ellie passing notes on Uglydoll stationary. He makes a comment about where the maker of Uglydolls got his ideas. The next day he finds an Uglydoll key chain on his chair in class. 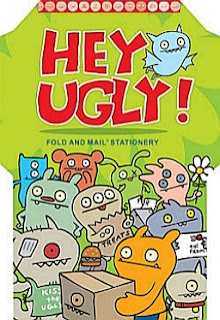 Auggie's hearing has finally deteriorated to the point of needing hearing aids. Traditional hearing aids hook behind the ear. Some even fit completely inside the ear.

That won't work for Auggie. Instead, he meets a doctor fascinated with Star Wars who makes Auggie look sort of like Lobot. In The Empire Strikes Back, Lobot's brain was connected to Cloud City's central computers which allowed him to "talk" with the computers.

Auggie's doctor is pretty awesome. He tells Auggie that Lobot is cool and says, "It's not like we're saying you're going to look like Jar Jar, you know?" (Good thing, in my opinion. Seeing a Gungan come to school would be sort of like seeing a Wookiee.)

Auggie's new Lobot ears help eliminate white noise. White noise is all the background noise that can sometimes gets in the way of hearing the important stuff. Like all the conversations in a restaurant might make it hard to hear your waiter. Or maybe in a classroom - well, not OUR classroom - it might be hard to hear the teacher with the whispers, desks moving, papers shuffling, and other sounds in the room. White noise sounds like this looks:

Continue to Part Seven: Miranda.
Posted by Mr. Wilhorn at 7:59 AM