What do you think?

World War II was fought between 1939-1945. Germany was the main enemy in Europe. Paris was occupied by Germany in 1940. (This is the same as Germany occupying Denmark in Number the Stars.)

The Maquis were groups of French Resistance Fighters. These were people who escaped to the mountains to avoid being forced into the German army and then fought back against them. Members were called maquisards or "armed resistance fighters." Partisan is another name for these fighters. As you can see in this image, they don't really look like soldiers.

According to Wikipedia (I'll leave the more in depth research to you.) there were about 200,000 Jewish people in Paris at the time. The Germans began passing laws against Jews in September of 1940, and they began taking Jews away in May of 1941. This continued until August of 1944. During this time nearly 76,000 Jews were taken from Paris and only 2,500 survived. (More on this later.)

Grandmère says her school had a chapel, which is a room like a church used for worship services, and behind that there was a crypt. A crypt is an underground room used for worship or as a burial site. This example is underneath the Notre Dame cathedral in Paris.

The sewers in Paris at the time, to the best of my understanding, were basically tunnels where waste drained out of the city and emptied into fields outside of Paris, so following the sewers would eventually lead to an open field, many times by a village. Today there are museums and tours you can take to see the sewers. Here are some examples of what the sewers look like. 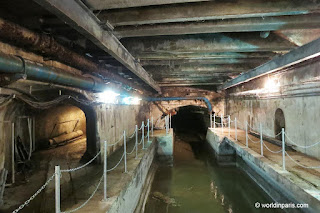 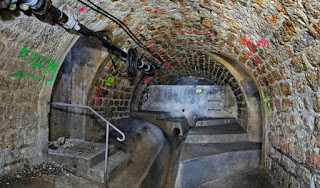 Grandmère lived and went to school in Aubervilliers which is just north of Paris.


The Germans didn't only take Jews. They took people that they felt were not perfect. This included people with mental and physical disabilities, gypsies, deaf people, people who disagreed with them politically, and some people with other religious beliefs. At many concentration camps, the people who were taken there were killed in gas chambers. This means they were forced to breathe poison gas.

Julian says that in his dream the Nazi officials looked like Darth Vader's Imperial officers. What do you think? 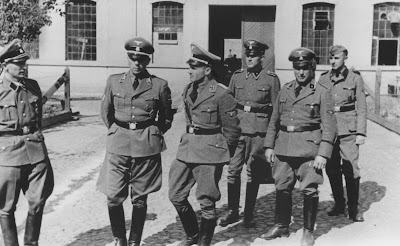