Justin's part is introduced with a quote from The Elephant Man, a play written by Bernard Pomerance that is based on the life of Joseph (sometimes called John) Merrick. John Merrick was a real person who lived in the 1800s. When he was two years old, growths began to appear on his face. As he grew older, his appearance continued to change until, according to Wikipedia, "His skin appeared thick and lumpy, he developed an enlargement of his lips, and a bony lump grew on his forehead. One of his arms and both feet became enlarged." His head grew to be 36 inches around.

The name "The Elephant Man" comes from John Merrick's time in a carnival freak show where people paid to look at "freaks." He was advertised at "The Elephant Man." He eventually did leave the freak show, but died in a hospital at the age of 27.

In one line of the play, John Merrick says the words quoted at the beginning of Justin's section.

"Sometimes I think my head is so
big because it is so full of dreams." 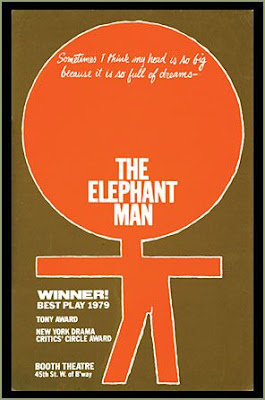